Home » Istanbul’s Meyhane Restaurants Are Famous For Their Mezes

Istanbul’s Meyhane Restaurants Are Famous For Their Mezes 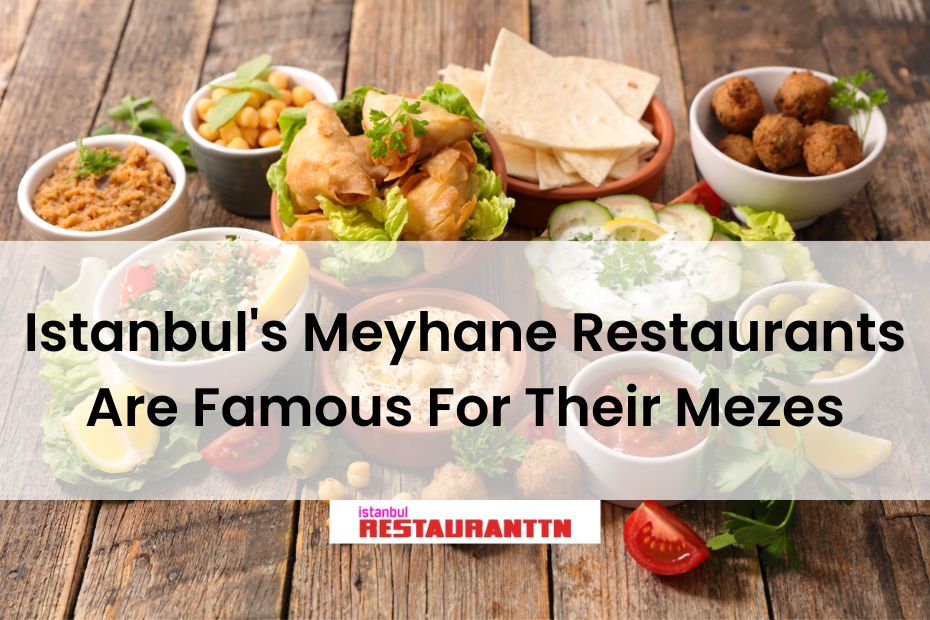 The Turkish mezes I’m about to describe are sure to whet your appetite. Meze is not just found in Turkey, though. It is also part of the food in the Balkans, the Mediterranean, and the Middle East, which were all once part of the Ottoman Empire. Meyhane is a restaurant that specializes in serving mezes. A meyhane is a typical restaurant that sells alcoholic drinks with mezes and other traditional dishes. Although many visitors frequent well-known meyhanes, they are not tourist attractions. Regular trips to their go-to meyhanes are made by the more gregarious Turks so that they may keep in touch with their social circles.

Typically, restaurants will offer mezes as a pre-meal snack or starter. The waiter will often bring out a large platter of the various mezes to your table so you may sample as many as you want. One or more will be chosen by each guest during the dinner party. The mezes are served family-style, with everyone contributing to the dish. Foods are better when accompanied by toasted bread. This article will help you choose and identify your preferred flavor profile.

Eggplants marinated in yogurt and grilled

Yet another flawless meal. Eggplants cooked over charcoal are mashed with a few swift strokes of a chef’s knife. Garlic, lemon, olive oil, yoghurt, salt, and black pepper are included in the dish. If it’s not served warm, it could not be fresh.

Eggplants cooked over charcoal and then mashed are combined with tomato, green pepper, and onion. For the dressing, we mix olive oil, vinegar, lemon juice, and salt. Out of the millions of types of eggplants, this is one of my favourites.

Akşuka, or Fried Eggplant, is a popular Middle Eastern dish

A second delicious eggplant dish! Fried eggplant cubes are tossed in a sauce made of tomatoes, garlic, salt, and olive oil that has already been boiled. It’s not uncommon to throw in some fried zucchini and green peppers, too.

Dip Made with Minty Yogurt (Haydari)

Turkish süzme is made by combining thick drained yoghurt with grated white cheese, fresh or dried mint, garlic, and salt. Raki, a non-sweet, anise-flavored drink prevalent in Turkey and the Balkans, pairs particularly well with this relatively basic yet much-liked meze.

Honey-dew melons, also known as galia melons, are a tasty summertime treat, especially when paired with a glass of wine or rak. When beyaz peynir (white cheese) is unavailable, wet feta may be used as a substitute.

It seems sensible that fava would be a staple on the menu in restaurants specialising in seafood, as it is a favourite of many fish eaters. Beans of a broad variety are cooked with roasted onion. After draining, the mixture is mashed and combined with finely chopped dill or parsley. Lemon and olive oil dressing is used, and the dish is served chilled.

Barbunya, like many Turkish meals made with olive oil, is best served cold and makes for a great healthy meze. Pinto beans, onions, carrots, tomatoes, and olive oil are the main ingredients. Vegetables like potatoes and green peppers are sometimes thrown in for good measure. Lemon juice is often added to barbunyas by those who like the flavor before eating them.

Similarly, this cuisine, which uses olive oil, is incredibly healthy. Olive oil is used to sauté the artichoke hearts with peas, carrots, and onions. To certain dishes, you could also add fava beans or potatoes. Naturally, it’s served chilled with a sprinkling of chopped dill.